Open Table is a community café occupying the site of where Paris Berlin Organic Bakery (now known as Bread & Butter Bakery) previously sat. Open Table is probably Auckland’s only crowdfunded café, evolved as an idea of a community hub by Hannah Feenstra and developed as a Kickstarter project. With her Masters in Entrepreneurship nearly in hand, Hannah first began her journey to opening her café. After 18 months of patient negotiations, the site was leased and the space could be cleared. The Kickstarter support allowed the renovations to take place, and Open Table to take shape. 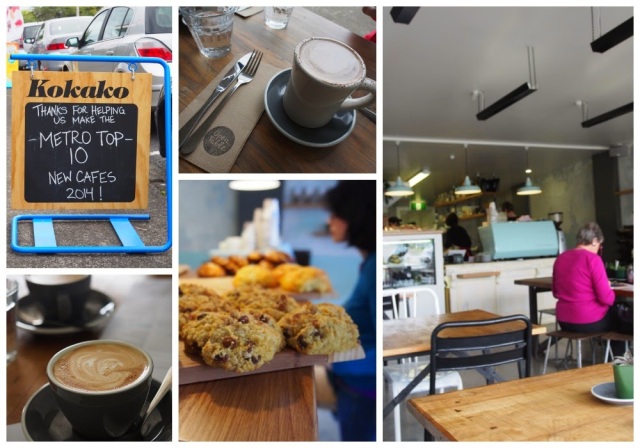 Open Table has leapt into the Metro’s Top 50 cafés in Auckland mere weeks after opening, – it opened in Sept, and the Top 50 is published in the November issue. This little-cafe-that-could has serious credentials.

Gen and I chanced upon Open Table on our way back from picking up my wedding dress (that’s a story for a later post). My first visit had us seated at the footpath seating where I could see the car (and its very precious cargo in the boot). Right away, Open Table has a wonderfully charming welcoming vibe. With the large roller door up, it feels like one large space. Look out for the Kokako sign in front.

As a Kickstarter project, all the supporter’s names are published on the underside of the menu; a really lovely touch. The menu itself was a breathe of fresh air, – inventive, wholesome and delicious.  The coffee (and hot chocolate) is from Kokako, breads from Bread & Butter Bakery, meats from Ellerslie Organic Meats and eggs from Frenz Organic eggs. The suppliers are as sustainable as you could get. The superbly friendly staff sets the mood, and you are greeted as warmly as if you were friends dropping by for a visit. 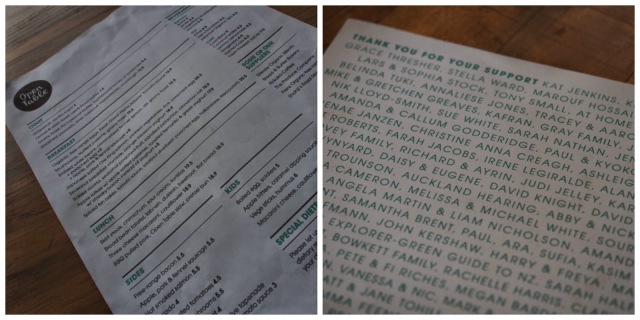 Gen chose the apple latkes with apple salted caramel, roasted tamarillo & Greek yoghurt ($17.90) and I had the baked ricotta with seasonal poached fruit, candied pistachios and a cinnamon roll ($18.90). Both were sensational. I loved the presentation as well; the sculptural plating, and the edible flowers are a welcoming touch. The apple latkes were moist with caramelised edges, the caramel syrup had the perfect level of sweetness. I enjoyed my crumbly baked ricotta balanced with the slight crispness of the poached fruit. Check out the layers of cinnamon goodness in the roll. 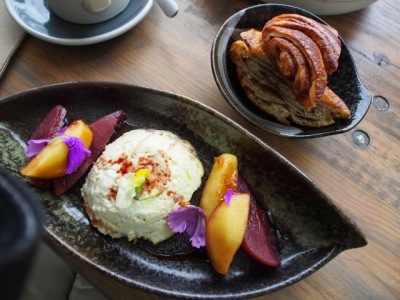 The second visit, I had the sautéed mushrooms on truffled polenta ($19.50). I found the polenta on the salty side(admittedly, I am salt-adversed), but I loved the truffle aroma. BL had the spiced fish cakes served with tomato sauce, sautéed silverbeet, poached egg, hollandaise and potato shards ($20.50), which I greedily helped myself to.

Open Table is a real boon for the Ellerslie community as a place for neighbours to gather and relax. It is on a reasonably quiet road (read parking right in front!), there’s a YMCA, Michaels Ave Reserve and its playground just minutes walk down the road. Open Table is set to be a true neighbourhood treasure, all thanks to Hannah and her wonderful dream.