My dear friend, J and I have had many good-natured mocking and debates over laksa. I assert that Sarawak laksa is the ultimate interpretation of the spicy noodle soup, whereas J always insists that the version from Kuala Lumpur is superior. And one day, the gauntlet was thrown and J agreed to cook for us the ‘superior’ KL laksa.

J made the spicy gravy soup from scratch, processing and blending the whole spices, which I have to take my hat off to. I only ever used spice paste; why would you, when you are a hacktress? But back on the subject of laksa, the main differences are:

The similarities are greater than the differences, but the proportions of spices and ingredients used have been adapted over time have resulting in quite unique versions of laksa.<

J’s recipe for KL laksa comes from Rick Stein’s. But as Mr Stein (or Ricky as I call him) is an ambassador for the Malaysia Kitchen programme, he does hold some credibility. And the flavours were wonderful.

Peel the prawns, reserving the heads and shells. Heat 1 tablespoon of the oil in a medium-sized pan, add the heads and shells and stir-fry for a couple of minutes until they are crisp and golden. Add 1.2 litres of water; bring to the boil and leave to simmer for 1 hour until reduced to 750ml. Strain the prawn stock, pressing out as much flavour as you can from the shells, and set aside.

Heat some oil for deep-frying to 190°C. Meanwhile, cut the tofu into 2.4x1cm pieces and drain well on kitchen paper. Deep-fry for 3-4 minutes until crisp and golden brown. Drain on plenty of kitchen paper and set aside.

For the laksa spice paste, put the dried chillies into a bowl, cover with boiling hot water and leave to soak for 20 minutes. Drain and put into a food processor with the remaining ingredients and blend to a smooth paste. Heat 3 tbsp of oil in a large pan over a medium heat, add the spice paste and fry gently for 2-3 minutes until it starts to smell fragrant. Add the prawn stock, coconut milk, fish sauce, sugar and 1½ tsp of salt or to taste, and simmer for 3 minutes. 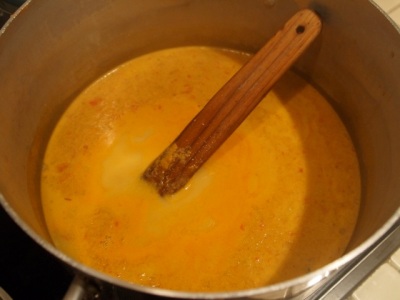 Drain and divide the noodles between 4 warmed, deep noodle bowls and top with the bean sprouts, cooked green beans and fried tofu. Ladle over the curry soup, trying to divide the prawns and chicken pieces equally between each bowl. Top each one with half a hardboiled egg and spring onions. 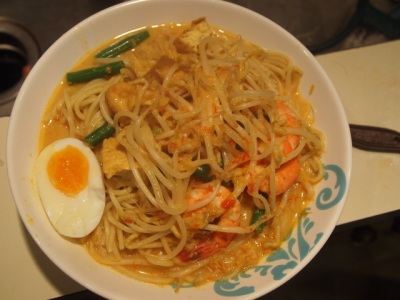 Thanks J & M for a delicious meal, and for my introduction to KL laksa. It was an incredibly tasty, warming dish. Even though KL laksa is also sometimes known as ‘curry mee’, though I thought the way the aromatics (tumeric, ginger, lemongrass) came together was more nuanced than that.

Was it better than Sarawak laksa? I would be a terrible guest if I claimed that, and unpatriotic if I claimed otherwise. Suffice to say, it was a great evening with fabulous friends and fantastic food.