Many of us purchase tomatoes from the supermarket or greengrocer, take them home and promptly shove them in the refrigerator without a second thought. Recently, a postharvest scientist told me that you should listen to your grandmother when she said to store your tomatoes at room temperature (mine didn’t cook with tomatoes or had a refrigerator for a very long time, so that point is moot). It may surprise you that all horticultural services state that you should never store tomatoes in the fridge. It certainly surprised me.

Tomatoes are sensitive to chilling, and low temperatures will destroy both the flavour and texture of ripe tomatoes.

Horticulture NZ advises that tomatoes should be stored at around 10-12°C, never in the fridge and away from sunlight. BUT, this is somewhat different from the scientific literature, which says to never store tomatoes below 13°C, or even 15°C.

Even though this is ‘common’ knowledge, the science behind this is still not well understood. Scientists can measure the physiological changes, and some biochemical changes, but they don’t know the genes which are switched on or off by the cold.

I was keen to test this out. I purchased some tomatoes;  kept 2 at room temperature away from direct sun, and 2 in the fridge for a week. And yes, after a week, the ones stored at room temperature were redder, firmer and tastes more flavoursome. The fridge ones had patches of blotchy colour, and was softer and tasted watery (okay, more watery than the room temp ones). 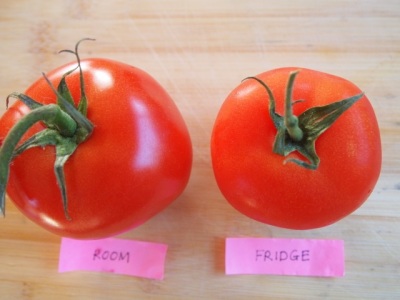 These tomatoes came on a stalk, and I was duly informed that the stalk is a marketing trick. The stalk imparts a tomato aroma (the uncut fruit doesn’t have much of an aroma); fooling the consumer into thinking the fruit has more flavour. So you are paying more money (‘premium’ tomato + weight of stalk) for a marketing gag. Hook, line and sinker….. I feel like the fool that I am…

So, to cut a long, un-finished story short, buy tomatoes off the stalk, and never, ever store them in a fridge. It makes complete sense; – tomato is a summer fruit after all, and was never designed to sit in a chilly environment for long.

One thought on “Storing tomatoes – the flavour issue”