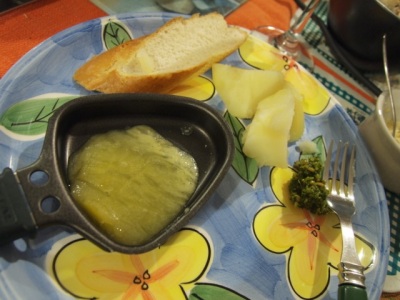 I’m always in for a DIY dinner party. Doubly more when the host tells you there’s melted cheese involved. Seriously, cheese should always, always, be melted. What marvellous alchemy is it that a rubbery/crumbly bit of salty, savoury yellow mass turns into lava of unctuous deliciousness?

The Swiss are onto a good thing with the raclette (both the name of a melt-y cheese and the electric grill used to melt cheese). The raclette grill consists of an electric element with a non-stick hotplate on top and non-stick minipans tucked underneath. Each guest gets their own pan. 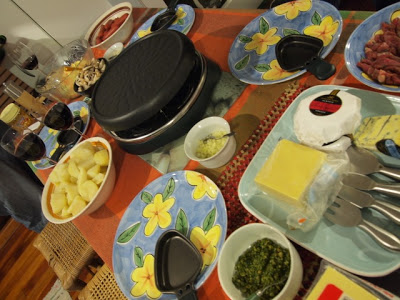 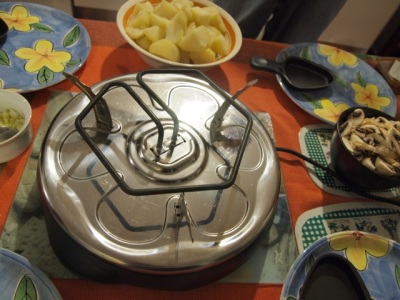 Actually all cheese can be melted, so you don’t have to use proper raclette cheese. We had cheddar, brie and blue, and they all turned warm, gooey and yummy. Slices of cheese are melted in the raclette pan and scrapped onto chunks of warmed baguettes. Cheddar was my pick for the evening, I accidentally over-melted the brie which turned into cheese islands in a sea of oil, and found the blue too salty. I was alone in that though, as the blue was more popular than the cheddar. I have much to learn about cheese.

Dr M, our illustrious host, had marinated some beef slices which we barbequed on the hotplate, along with cheese kranskys and mushroom slices. Boiled potatoes are de rigueur at a raclette dinner, but works even better when grilled on the hotplate until a crust develops. 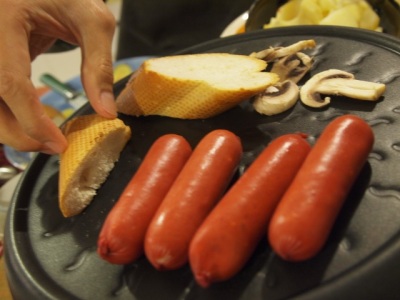 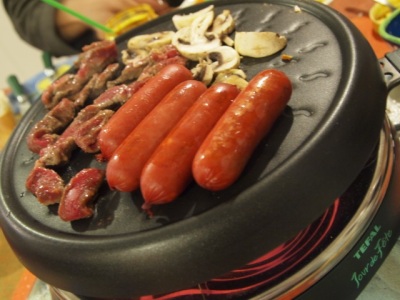 We ate and talked and laughed (and drank) and ate and ate some more. All that skiing in the Swiss Alps must burn off the calories, but mere mortals like us were completely outdone by all that cheese. Luckily our host also provided a very tasty coleslaw to line our stomachs in between the cheese.

A raclette party is a tremendous idea, especially during the coldest week NZ has seen in decades. There’s nothing better than grilled cheese and friends to ward off a polar blast. I had a fantastic time, – thank you Dr M for a totally gluttonous evening! Dr M’s raclette set came from overseas, and I don’t recall seeing these grills sold in NZ, though if you ask nicely, I’m sure he will lend you his set.